M1 LEA Economic and social questions in the English-speaking world


Translate this passage into English before next Tuesday, when we will look at it in class.

Nicolas Offenstadt “Historiographie”
Questions on Chapters three and four, which will start our discussion next week.

Internet reading:
Read this article (in French) which is a book review of a work in English. http://quaderna.org/richard-j-evans-in-defence-of-history-londres-granta-2000/
Come with questions if there are parts which are hard to understand.


Personal questions
a Do you have a favourite kind of history book?
b If historians can be storytellers, what kind of stories should they tell if they want to interest you?
Publié par John Mullen à l'adresse 2:26 pm No comments:

The Old Grey Whistle Test was a BBC2 television programme, perhaps the first to take popular music seriously. It was launched in the 1970s.  This documentary tells its history.

If you are rather busy, listen to the videos in MP3 format. You can convert them with an online tool such as clipconverter. In this way you can listen to them which watching "chasseurs d'appart" with the sound off.
Publié par John Mullen à l'adresse 11:05 am No comments:

The election of 1974 was called because of a political crisis connected to the miners’ strike and the governments’ unwillingness to allow the miners a wage rise as high as they demanded. This university lecture by Vernon Bogdanor gives a fair-minded if establishment view of the events leading up to this crucial election, which would bring Harold Wilson back to Downing Street.

If, like me, you have too much to do , use an online tool like clipconverter to make the videos into MP3 files you can listen to while stargazing.
Publié par John Mullen à l'adresse 5:32 pm No comments:

Writing the history of the First World War : one

You will find here a recording of our Master's research seminar "Writing the History of the First World War: part one". It is concerned mostly with the use of (very varied) sources.

I was interviewed very briefly this morning by skype on the TV channel France 24, concerning the re-election as leader of the British Labour Party of Jeremy Corbyn.

The audio can be heard here.
Publié par John Mullen à l'adresse 11:34 am No comments:

I will be giving a series of lectures on this subject beginning early November. Budgets being what they are, and the agrégation programme having several important components (literature, linguistics, civilization etc.), there will be 15 hours of lectures. This is not a lot, and that is one of the main reasons I am regularly recommending documentaries and books, so that when I begin the lectures my students will not be starting from scratch.

Today’s documentary is an interview with a politician. Thirty five year old interviews with politicians may not be the most exciting programmes on earth, but important subjects are covered here. The interview takes place in 1980, with one of Margaret Thatcher’s ministers, Geoffrey Howe, Chancellor of the Exchequer at the time. He is defending the record of his government, only one year into their term of office, and quite naturally, in order to do so, he criticizes the choices which were made by the previous Labour government from 1974- 79, and even the policies of Edward Heath from 1970- 74 (since Heath’s conservatism had a notably different emphasis from that of Thatcher).

Listen to what he has to say about taxes, about wage rises, about public spending and about the role of the state in general. His critics at the time were particularly unhappy with the « tax switch » which meant that less government money came from income tax and more from VAT on goods which were bought and sold. This switch has important social repercussions : poorer people do not pay income tax, whereas everybody pays VAT on what they buy. This means that the tax switch was unfavourable to the poorer sections of society. Public spending cuts, too, are more of a problem for poorer levels of society than they are for wealthier ones. Geoffrey Howe’s argument, as you will see, was that there was no alternative, and that the increased income for businesses would encourage them to grow, which should create jobs and prosperity.

You will also notice in the interview that trade union organization remains very powerful at this time.

The video is here
https://www.youtube.com/watch?v=1etyQv0R_ug


If, like me, you are overworked, use an online tool like clipconverter to make the videos into MP3 files you can listen to while cleaning the bathroom.
Publié par John Mullen à l'adresse 9:01 am No comments:

Questions on « L’historiographie » by Nicolas  Offenstadt, chapters one and two.

These questions are to help launch a discussion in class. Questions will be posted here every Thursday so come back often.

How does Offenstadt look at the question of the position of the historians themselves ?

What are some of the uses of history which Offenstadt refers to ?
Might some of these be still relevant today concerning writings on the First World War ?

What is « présentisme » ? Can you think of any examples which Offenstadt does not mention ?

What is or was the linguistic turn ?

(internet research) :
1. How long were
a) the Middle Ages
b) the long eighteenth century
c) the short twentieth century
2. Why did historians invent these periods ?
3. Who is Hayden White and what are his main ideas ?
Publié par John Mullen à l'adresse 8:43 am No comments:

For next week, read the article "The Luck of the Irish" and answer the following questions, which we will discuss in class :


In the booklet, read the  article : “The Luck of the Irish”
Questions

1 Find words which could replace

Statistics
Look at the graph on page one of the article “The Luck of the Irish” and complete the following sentences, with the indicated number of words, so that the sentences accurately reflect the information in the graph, as well as being grammatically correct sentences.

I would recommend that once a month you read again the framing text (texte de cadrage) on the British civilization question, which you can find here

This is important, because each month you will understand this document a little better, and see more clearly what the jury are looking for, and while you are reading books or articles or watching documentaries or listening to lectures, you will be fitting the new information into your general view of the period.

On this blog I have been recommending documentaries, but of course books are very important. The full bibliography has been published on the site of the SAES:

Nobody reads all that, of course; you need to choose. Don't hesitate to read only key chapters of the books.

This video is not a documentary, but a musical theatre play, produced by a radical theatre group of the type which had significant success in the 1970s
Touring from 1973, and presented on BBC television in 1974, this Scottish nationalist play tells a story of how the English elite have constantly reorganized Scotland and the Scottish economy  for their own benefit. It is not intended to be impartial. It helps to explain some of the roots of national feeling in Scotland, which will be visible in the election of a number of nationalist MPs during the decade, although the seventies will finish with a very dark period for Scottish nationalism.

You will find it here

If, like me, you are sometimes a little busy, use an online tool like clipconverter to make the videos into MP3 files you can listen to while darning your socks (although, this video being an artistic production, it would be better to watch it this time).
Publié par John Mullen à l'adresse 7:32 pm No comments:

I know I am repeating myself, but I have just finished reading this book, which, in my opinion, is far and away the best published history of the period: well-written, fair-minded, and wide-ranging. I don't know the other books of this author but I will be reading them. 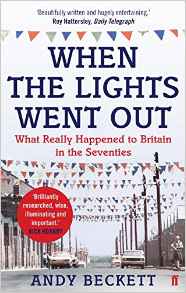 These recordings will often be available, but not always.

Naturally enough, we remember first of all the Prime Ministers who, each in their own way, made a difference to British life and society. Here is a television interview with Prime Minister Edward  Heath in October 1971. He covers a large number of issues, and if you can understand most of what he is talking about, or avoiding talking about, you are making very good progress. Notice the handkerchief in the top pocket, which was already old-fashioned in 1971.

Here is the interview, with famous presenter Robin Day.

If, like me, you are sometimes a little busy, use an online tool like clipconverter to make the videos into MP3 files you can listen to while practising your Tai Chi.
Publié par John Mullen à l'adresse 8:09 am No comments:

We will be using the First World War as an example to ask questions about what kind of stories historians tell about the past, and why.

For week two, you should watch this video by Christopher Clarke (How Europe went to war in 1914), and be ready to discuss is in class.

As you know, history shows no shortage of horrifying events. This (sometimes harrowing) video shows one aspect of the Northern Ireland conflict. It is a history of the Maze prison. The Maze prison was built to replace a « Prisoner of War » style camp at the point when the British government decided it would be better tactics to treat paramilitary prisoners (Republican and loyalist) as criminals, rather than as political prisoners. From 1972 to 1976 such prisoners were « special category » - fundamentally treated as political prisoners. In 1976, this changed. The documentary includes interviews with both loyalist and republican paramilitaries, and with prison officers. Some of these people were later involved in the « peace process » which led to the present situation where there is almost no military conflict in the province. The first half of the documentary, up to just before the hunger strike, deals with the 1970s.

The video is here
https://www.youtube.com/watch?v=jeixMFHtv18


If, like me, you are snowed under with work, use an online tool like clipconverter to make the videos into MP3 files you can listen to while weeding the allotment.
Publié par John Mullen à l'adresse 8:43 am No comments:

If the 1970s are best known as an era of social and economic crisis, they are also considered a particularly creative period in UK popular music : indeed there may well be a link between social crisis and pop creativity. We often see punk rock considered as a response to the return of mass unemployment, UK reggae as, among other things, a demand for visibility for UK-born Black people. Less often discussed is the late 70s genre « synth pop ». This documentary looks at synth pop music in the late 1970s.

You will find the video here  https://www.youtube.com/watch?v=TK1P93r9xes

If, like me, you are snowed under with work, use an online tool like clipconverter to make the videos into MP3 files you can listen to while waiting for a train..
Publié par John Mullen à l'adresse 4:46 pm No comments: