One of the best BBC sitcoms from the 1970s, The Good Life. Two middle class English people decide they want to produce all their own food etc, and stop earning money « in the system » . But they want to do this while still living in their middle class street, next to their very pretentious neighbors.

Here is one episode

The Third Programme,  which ran under that name for the twenty years after the Second World War, represented a crucial episode in the history of the BBC. Its development is a story which includes the excitement of communicating high culture broadly, the influence of elitism, and the varied forces which worked against it. This documentary opens up many of the central questions, and gives plenty of food for thought, although, inevitably for a short documentary, there is some simplification involved.

It is 39 minutes long and I highly recommend it.

If, after a little research, you can understand both these humorous drawings, you will be doing very well... 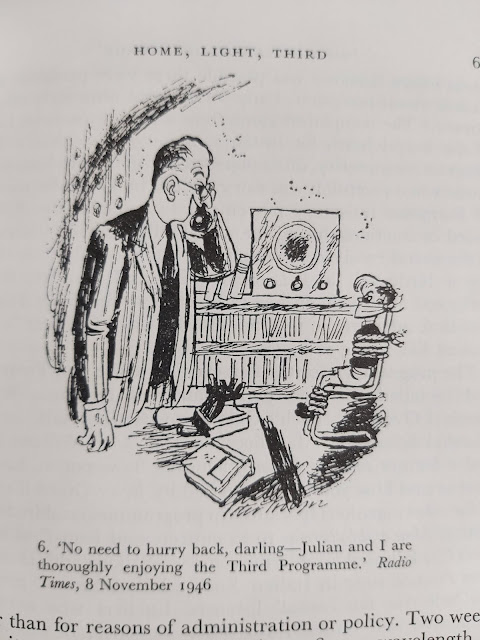 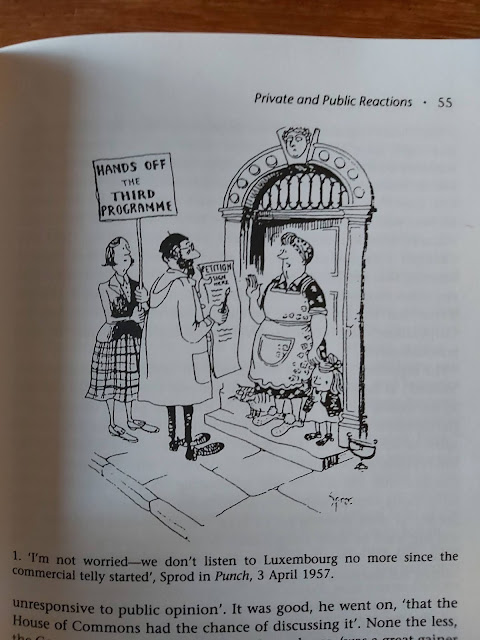 Finding important questions is at the centre of doing history, rather than memorizing dates. But history is rooted in time, so you do need to know a number of dates. I recommend drawing up a timeline of the BBC, to keep the main developments in mind. Here are five BBC reports on five significant dates during the post-war boom

BBC report on the first BBC TV broadcast from continental Europe , in 1950

BBC report on the end of the BBC television monopoly in 1955.

BBC report on a very famous April Fool joke in 1957. 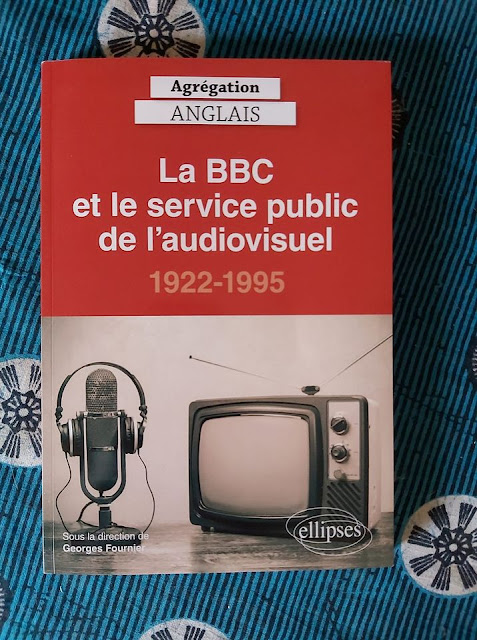 Classes begin on the 23rd September.

The passages you will translate are here.

Each week you will translate the passage before the Wednesday class. After the class, I will post my suggested translation with notes here. It will be removed after two weeks.

If you send me, before Wednesday, by email in word or odt (I do not accept handwritten work on paper), your translation of *the following week’s passage* I will send you a personalized correction.

If you are enrolled at Rouen, but you cannot come to class for Covid or professional reasons, of course you may send me translations by email for comment.

Looking forward to meeting you all.

The BBC has always claimed to favour impartiality, both on the grounds that impartiality of the broadcasting media is important to a democratic society, and on the grounds that overt or mendacious propaganda is not effective in the medium term, since trust in media is eroded.
The meaning of "impartiality" needs to be studied: many commentators  consider that the BBC has not been impartial, or even that impartiality is not possible.
This argument has exploded into public consciousness several times. The most well-known example is perhaps when a documentary programme ("Maggie's Militant Tendency") criticized extremism in the Conservative party. Here is a documentary about a slightly less well-known case - the 1971 documentary "Yesterday's men". The Labour Party had lost the election of 1970, and this documentary interviews Labour leaders. The title of the programme shows opposition to the Labour Party, and the content of the interviews was allegedly biassed against Labour.
https://www.youtube.com/watch?v=AVKJ--_UwRY
This article from the BBC history website shows that the BBC today does not defend the programme.
https://www.bbc.co.uk/historyofthebbc/research/editorial-independence/yesterdays-men
Was it an unfortunate exception, or a sign that the BBC are in fact partial? Opinions are divided.

There has only ever been one general strike in Britain, in 1926. It profoundly affected the nation, but has often been neglected.  It was a key moment in the life of the BBC. This piece  on Youtube by Ken Loach, sympathetic to the working class movement, looks at the last days before the strike, and the strike itself.
https://www.youtube.com/watch?v=icgi10LINAg&
Publié par John Mullen à l'adresse 3:54 pm No comments:

It is holiday time, so a little light relief is in order: classic BBC comedy from the 1980s: Irish comedian Dave Allen. It is interesting to look at what would be considered less funny, or indeed not funny, today.