This recording takes us through British political social and cultural history from 1945 to 1970. The Cold War, the Welfare state, the Suez crisis, racism and antiracism, decolonization, the legalization of homosexuality and much more.

This recording, just over an hour long, takes us from the anglo-saxon invasions to the Black Death. Viking invasions, William the Conqueror and all that.

I will be absent Wednesday  26 and Thursday 27 October.

This translation will stay on the blog for two weeks, so do download it if you need it . If you just chanced on the blog, the original passage translated can be found here .

Note on the style: much of the passage is quite literary (“elle coule vers ma calvitie un oeil affranchi” and so on) but certain sentences are supposed to represent the thoughts of the lady in the story and so mmay be more informal in style (“on connaît ça, mon cher Monsieur” etc). One must try not to be too informal in the first case, or too formal in the second.

The surly[2] lady knew[3] so much[4] more about life than the colleague[5] she kept calling “sunshine”.[6] She looked suspiciously at the well-dressed[7] gentleman[8] who was queueing up to make a telephone call, when he should have been[9] relaxing at home, in some Louis XV[10] furniture or at his desk, ensconced[11] in his swivel chair.[12] She could sense something secret,[13] a bit on the side[14], involving poste restante[15] and all the rest. She ran her expert eye over his bald patch.[16] We know how it works, don’t[17] we, dear Sir?[18] This one can wait. He is sweating[19] with impatience. He is far too scared of not getting his precious Lausanne call to moan. Pigs, they are,[20] all of them. She leant over[21], smiling obnoxiously: "Is the gentleman's line at home[22] out of order, perhaps?".[23] He looked back at her for two or three seconds and the next thing you know is that she[24] felt intimidated, intimidated she was, and she turned away without another word.  "Do you have that call to Switzerland,[25] sunshine?" she said. And the other girl answered all at once "Well, yes. You've got it on line four, sir[26]".

While he covered the few yards[27] to the phone booth - and the tiles, littered[28] with cigarette butts[29] and crisscrossed by the sunlight would be engraved in his memory-[30] the decision took root in him. It was a clear and joyful one: he would give[31] Marie America.[32] It was one of Mother’s[33] favourite expressions: "Don't you go thinking I can give you America!".

What she had meant was: "For Christmas[34], ask me for a new satchel, or for Mr. Bainville’s History of France for Children[35] and not those expensive trinkets you’re always wanting.[36] I can’t afford to buy you useless presents any more, my poor darling". And so, all through his childhood, he had resented useful presents. The raincoat which was a little too large ("It’ll last you two winters") and[37] the shoes with crepe soles[38] piled up on his childhood, like sediment left behind by birthdays and other celebrations.[39] He had kept from all this a loathing for generosity. Presents would[40] always force him to purse his lips[41]. "Well, speak then, Sir! Speak, now!". To whom should he speak?[42] He could only hear hissing and silence, and suddenly a voice which said: "Why don't you add a little butter? I always add a little butter...Hello, Geneva?". Well, the time had come at last to give America. He would take Marie there, Marie whose voice he could hear. My Lord, she sounded so young![43]  She was like a high school girl surprised by the boy she had fallen for during the last dances on a Saturday night,[44] a girl made for gardens and for the beach with her sweet, cheerful, cocky voice, close, so close that her Vaudois accent squeaked in his ear. Marie and her quick sweetness, Marie, and he sat down, placed the stool under himself, and closed tightly the double-glazed door, behind which a resigned queue of people was waiting, at the feet of the big-bosomed telephone operators : the man with a medal who could not get through to Lamotte-Beuvron, the joiner, the young girl who was hoping to get Tours, and[45] a female newcomer who must be Spanish, all with their mute and fast-moving lips, like human fish out of their nets, city cattle, game in summer hunts, while he himself was talking to the heroine of his saga. 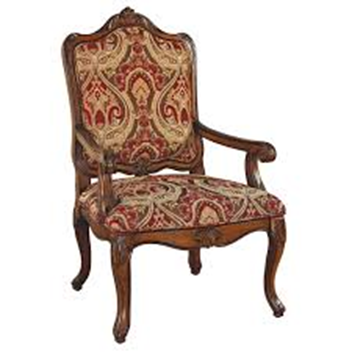 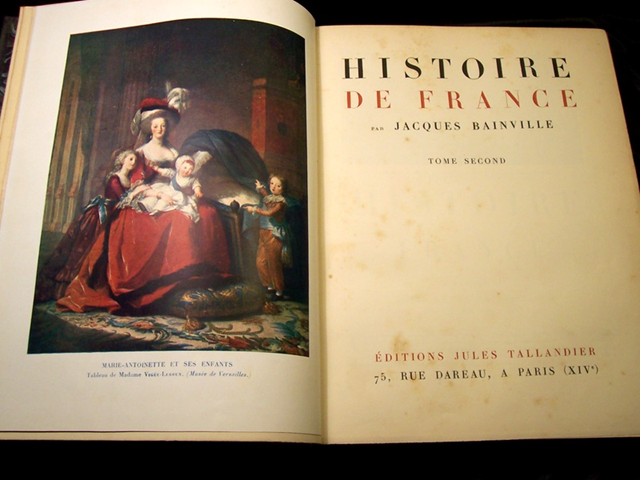 One of Bainville’s history books

[1] You can see the author being interviewed about the novel here https://www.ina.fr/video/I13316077

[3] Often when the passage in French isin the historic present, it is obligatory to translate into the preterite in English. In this case, the preterite is definitely much better, but the present could just about be justified.

[4] “Knew life way better” is rather too informal.

[5] In many jobs, “collègue” translates as “workmate”, particularly in working-class jobs … the word seems to have retained a masculine flavour, but this is changing, and I think the word would be acceptable here. “Co-worker” is a little too 21st century, I think.

[6] Or “pet”, for example. We are looking for something a little condescending, so “my dear” may not be enough. Someone suggested “my girl”, which is very good. I cannot see any reason to put a capital letter. Although in French, the inverted commas are not used, it is better to put them in – throughout the passage.

[8] The normal translation for “un monsieur”.

[9] It is  a very good idea to introduce a verb here, although a structure with « instead » is possible.

[10] The lady is imagining the gentleman’s furniture. No doubt we are speaking of furniture in the style of Louis XV, not furniture which actually dates back to the 18th century.

[12] Students are usually tempted by “armchair” for anything with arm rests because they are usually “fauteils”. But the word « armchair » is generally much more restricted.

[13] “Clandestine” is fine ; “underground” sounds political. “Illegal” is not correct: Although technically adultery was condemned by criminal law in France until 1975, I do not think there is a reference to the law here.

[14] “Some sex business” would be fine. Someone tried “some dirty story” which I thought was good.

[15] I think some students are too young to remember what this was, but before cheap mobile phones, it had its importance.

[17] Because this is imagined internal dialogue, a contraction is acceptable.

[18] I would not put inverted commas here, because the lady no doubt does not speak these words aloud.

[19] Note that the verb “perspire” is possible, but not the verb “transpire” which has a different meaning.

[20] Again, it is far better to avoid a structure without a verb.

[21] Not « bent over », which is a more extrme movement, to pick something up off the floor, for example.v

[23] I had not initially understood this. She is pretending to ask about his home telephone, and trying to embarass him.

[24] I am trying to avoid here the reference back using a noun, which is far more common in French than in English.

[25] Someone thought it was “this Swiss lady”. In that case, it would be that the gentleman had asked to phone “Miss so and so” rather than just giving a number. This seems to me unlikely : I think she is talking about the country, Switzerland.

[26] Use a capital for « sir » when beginning a letter or email with « Dear Sir » or if the word is followed by the name of the person « Sir Nicholas ».  You will know that in the UK, using « sir » in shops is rare and reserved to high class shops. However, here, the lady is speaking to someone of a higher class than her usual customers.

[27] Better than “metres” here. Especially in the 1960s, metres would only be used in professional discourse.

[28] I am fairly sure the cigarette butts are still present on the floor.

[29] Do not try to make a compound, three-word adjective here.

[30] Someone found “as the tiling, covered with cigarette butts and chequered by the sun, carved itself into his memory”, which is excellent.

[31] Most students tried “offer”. The word « offrir » is hundreds of time more common in everyday French than is “offer” in everyday English.

[32] A couple of people thought that, since the expression with America exists in French (see here ) but does not exist in English, they would replace with “the world” or similar. I think it is better to keep a literal translation of the French expression, which is explained in the passage, and which leaves us with a flavour of 1960s France.

[33] Remember that “Mum” in English is considerably more informal than “Maman” in French. In addition “Mum” , especially in the 20th century is more a working-class expression. « Mother » is safest but “Mama” would be possible and would underline the fact that the gentleman was from a high social milieu.

[35] Several students wrote “for kids”. There is no doubt that this would be the title, in the 21st century, but in this gentleman’s childhood we are in the first half of the 20th.

[38] “Crepe-soled shoes” is just about possible, but not of course “crepe soles shoes” because “shoes” is in an adjectival posiition. (Compare such expressions as “a ten-man team” and “a three-week holiday”.

[42] Note that sentences without verbs are far more systematically avoided in English than in French (this is why we so often need to translate “oui” as “yes,I do” or “yes, I can” etc.).

[43] It is almost always best to add a verb when there is not one in French.

[44] A number of students tried a genitive structure (Saturday night’s dances or similar). This is quite impossible, as the case does not enter into the very restricted number of cases where the “Saxon genitive” is used. Revise section  18.3 of the Grammaire explicative de l’anglais (I am using the 4th edition).